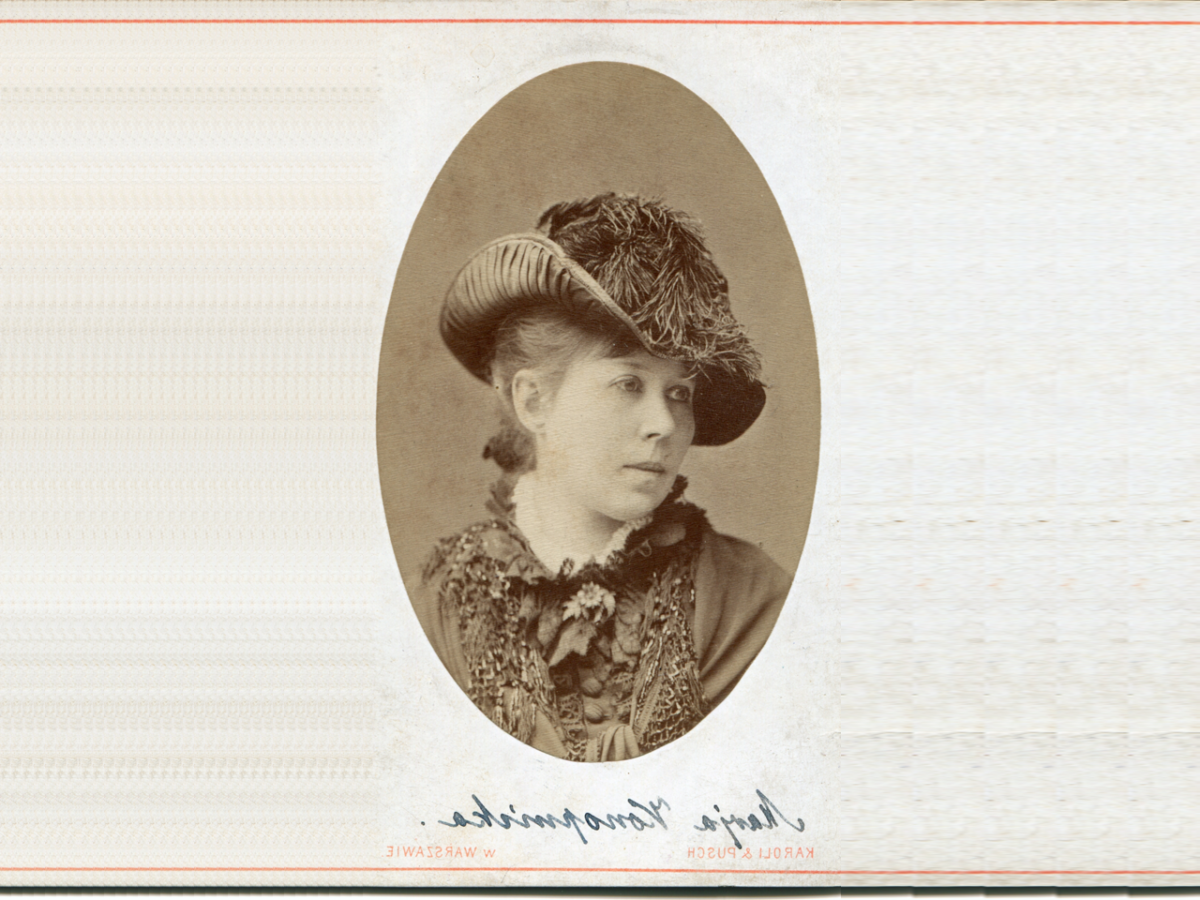 Maria Stanisława Konopnicka, née Wasiłowski, was born on 23rd May 1842 in Suwałki to Józef and Scholastyka, née Turska. Her father was a barrister for the Prosecutor General and at the Civil Court for the Governorate of Augustów*. She spent the first seven years of her life in this city by the Czarna Hańcza River along with her five siblings, Wanda Zenobia, Jan, Laura Celina, Zofia and Jadwiga Julia. The Wasiłowskis rented a flat in a building owned by the Zapiórkiewicz family, No. 200 ul. Petersburksa (Petersburska Street), now No. 31 ul. Tadeusza Kościuszki (Tadeusz Kościuszki Street) and the home of the Maria Konopnicka Museum.

In 1849, the family left Suwałki and moved to Kalisz, a city located in the centre of the modern-day Poland. It was there that the youngest daughter, Celina Maria, was born. Scholastyka Wasiłowksa died in 1854 and from then on, the children’s father took sole responsibility for their care, upbringing and education. From 1855 to 1856, Maria was a pupil at a boarding school for girls run by the Benedictine Sisters of Perpetual Adoration of the Blesséd Sacrament in Warsaw. While she was there, she met Eliza Pawłowska, later Orzeszkowa, who went on to become a renowned writer. The friendship they formed at school would be a long-lasting one.

In 1870, Maria Konopnicka made her debut as a poet with a poem entitled Zimowy Poranek (A Winter’s Morn), which was published in a regional weekly newspaper, “Kaliszanin” (The ‘Kaliszian’). However, literary success only arrived with the publication of her W górach (In the Mountains) series of poems . One of the poems from the series, Przygrywka (Prelude), appeared in a Warsaw publication, “Tygodnik Ilustrowany” (The illustrated Weekly), where it met with an extraordinarily favourable review from a popular writer and future winner of the Nobel Prize in Literature, Henryk Sienkiewicz. His response to the poem gave Konopnicka her entrée to creative circles.

In 1877, Maria moved to Warsaw with her children and dedicated herself entirely to literary work. From 1884 to 1886, she was the editor-in-chief of “Świt” (Dawn), a scholarly weekly for women. On 13th February 1890, she left for Krakow, beginning what would become twenty-two years of travelling around Europe. Despite her continual wanderings, she never lost contact with her family and homeland, as her uncommonly abundant correspondence expresses. Konopnicka became famous as an author of lyric poetry, short novels and stories where she devoted plenty of space to social, folk and children’s themes and topics. Her patriotic writings won her particular renown, especially one song, Rota (Oath), which first appeared in 1908 in “Przodownica” (Leader), a monthly published in Krakow. It was set to music by Feliks Nowowiejski and sung in public for the first time in Krakow, on 15th July 1910, during the ceremonial unveiling of a monument commemorating the Battle of Grunwald, five hundred years after that historic Polish victory.

In 1902, Konopnicka celebrated her silver jubilee as a writer; she had spent twenty-five years creating literary works. She received a gift from the nation; a small manor house in the village of Żarnowiec, in the region of the Bieszczady Mountains in the south-east of present-day Poland. She died on 8th October 1910 in Lwów** and was laid to rest in the city’s famous Łyczakowski Cemetery.

*A governorate was the highest administrative division in the Russian Empire. Suwałki lay under Russian rule as a result of the Partitions of Poland, in other words, the successive seizure of territory by the Russian Empire, the Kingdom of Prussia and Habsburg Austria in the second half of the eighteenth century. The sovereign state of Poland was eliminated and her lands were more or less completely divided by the three powers. She would not regain independence until 1918.

*Maria Dulębianka was a painter, writer, social activist. Her friendship with Maria Konopnicka was a long-standing one.